Republican Tea Party Positions - In their own words. GO VOTE!!

2) Outsource American jobs oversees and prevent the Democrats from bringing jobs back to America by using foreign funding to attack their candidates. (GOP defeats Dem bill to prevent outsourcing)

3) Government should not prevent private businesses from discriminating on the basis of race. – Rand Paul

4) Gays and single sexually active women should not be legally allowed to teach. – Jim DeMint

5) Victims of incest rape should be forced by the federal government to bear their rapists child. – Angel, Palin, Paul, O’Donnell (official GOP platform calls for illegal abortion - no exception)

11) The separation of church and state is invalid – Ken Buck, Angle, O’Donnell

The Tea Party supposedly touts the US Constitution, yet we have never seen a group more bent on CHANGING the the Constitution. They want to change the 14th amendment, the 17th amendment, they want to reject the supremacy clause Article VI, Clause 2, and federal taxation Article I, Section 8, clause 2.... and if it were up to them, they'd have a religious (Christian) test for political office which violates Article VI, paragraph 3.

Now that's respect for the Constitution. They raise their "Taxed Enough Already" signs in a year where the US saw the lowest taxes in 60 years. A real real bright group you have there!

Posted by William at 8:47 AM 3 comments: Links to this post 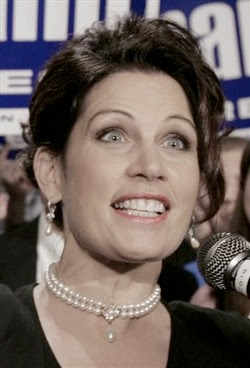 Top teabagger website, PJTV, touts documented liar Michele Bachmann [R-MN] as an example of a "smart girl." Pulitzer Prize winning non-partisan fact checking website PolitiFact.com has called her out on eleven separate lies, giving her the distinction of an "all false/pants on fire record" - one of the most consistent lying politicians in congress.

Thanks PJTV for showing us an apt example of whom conservative teabaggers consider a "smart girl."
Check out some quotes from the "smart girl."

"There are hundreds and hundreds of scientists, many of them with Nobel Prizes, who believe in intelligent design."
- Michele Bachmann

Bachmann has scored five Pants on Fire ratings, plus six False ratings. After 11 encounters with the Truth-O-Meter, Bachmann continues to hold the rare distinction of an all-False/Pants on Fire record.

Bachmann is up by single digits in recent polls, ahead of her Democratic challenger Tarryl Clark.
Posted by William at 7:07 PM 2 comments: Links to this post

Labels: lying republicans, teabaggers
Newer Posts Older Posts Home
Subscribe to: Posts (Atom)
What's a "loose canon"?
Differing from a "loose cannon" which means - an irresponsible or reckless person, a "loose canon" refers to a loose set of rules, in this case ... my rules. Unlike many conservative bloggers that stifle debate and delete comments, I don't!