How dumb is Fox News ... and their viewers? 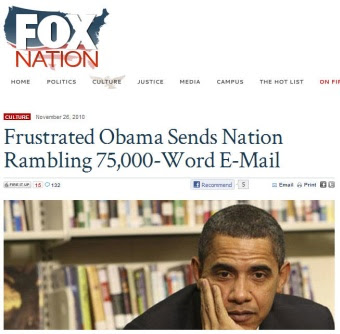 Fox News posts a fake story disparaging Obama as real news... from "The Onion," a satirical 'faux news' site.
Further adding to the realization that Fox News thought this was real, they scrubbed the article and comments from their site as soon as they were called on it. They published no retraction, clarification, or correction.
What a bunch of dumbasses.
RS:

The Fox News sister site re-posted a joke from the satirical website The Onion Friday about President Barack Obama sending a 75,000-word e-mail to the the entire nation. At no point does Fox Nation note that the story is a satire.

The Onion story joked that Obama had "reached the end of [his] rope" and sent out the "rambling" stream of consciousness e-mail that addressed everything from the war in Afghanistan to his live-in mother-in-law.

The story goes on to say that the fake Obama e-mail was 27 megabytes and 127 printed pages.


...many of the comments on the post treat the story as if it were actual news.

"It is really sad that in a time of crisis in this country with troops on foreign soil the economy lack of jobs and now N. Korea once again rattling their saber we have a President sitting in the White House that by what I read in the email is utterly losing it," Goofy1954 wrote. "We can not afford to have him in the White House at such a critical time."

"This should be enough to have him removed from office immediately......he is now the highest security risk to this nation," Obamababble observed.

"What you are seeing folks is the human unraveling and development of a self-delusional, irrational madman becoming unhinged. Can anyone say Hitler?" Mmttomb3 asked.

This speaks pretty clearly to the level of intelligence of Fox News and their viewers.
Posted by William at 12:10 PM No comments: Links to this post

Labels: Fox News, ignorance
Newer Posts Older Posts Home
Subscribe to: Posts (Atom)
What's a "loose canon"?
Differing from a "loose cannon" which means - an irresponsible or reckless person, a "loose canon" refers to a loose set of rules, in this case ... my rules. Unlike many conservative bloggers that stifle debate and delete comments, I don't!