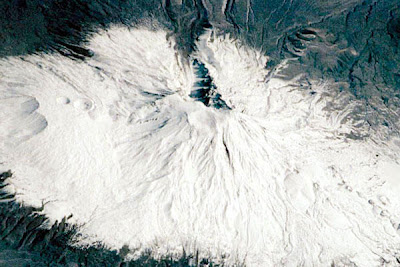 Dr. Randall Price was the "archaeologist" on the Chinese-led team in 2008 when this alleged discovery was first made. A leaked email from Price – which he confirms that he wrote – shows that a group of local Kurdish men trucked wood up to the mountain and staged an elaborate hoax for the Chinese team.

Dr. Randall Price, an evangelical Christian and former member of the Chinese-led team that announced this week’s finding, is director of the Center for Judaic Studies at the conservative Liberty University in Lynchburg, Va. Although he is referred to as an archaeologist, like many "evangelical archaeologists" ... he has no formal science education in the field.

What is really interesting is that the "evangelical archaeologists" claim the wood has been carbon dated to 4800 yrs old. Funny.... Christian fundamentalists and creationists often reject carbon dating as invalid, maintaining that it is impossible for the earth to be billions of years old.

If I had a nickel for every contradiction ....

more
Posted by William at 7:04 PM No comments: Links to this post 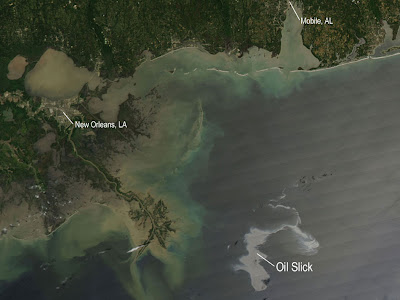 5000 barrels of oil a day spilling into the Gulf of Mexico. The slick is expected to hit the coast tomorrow.

The spill occurred on Earth Day.

AP: A new oil leak was discovered at the site in the Gulf of Mexico where a drilling rig exploded and sank, and experts now estimate that five times more has been spilling into the water a day than previously believed, the Coast Guard said late Wednesday. Eleven workers are missing and presumed dead.

Hope this serves as a lesson to those mindless idiots who chant "Drill Baby Drill" .... but then again, you wouldn't expect people like that to give a shit about the environment.
Posted by William at 9:10 PM 1 comment: Links to this post

GOP SUCCESS DEPENDS ON THE FAILURE OF AMERICA

Republicans are scared. America is coming back. Jobless claims are down, GM has paid back the bailout 5 yrs ahead of time with interest and hired more workers, the banks are making money, housing market is up, and the economy is improving. The only thing the Teabaggers have to complain about is the blackness of the President.

Meanwhile the GOP has nothing to do but fuck things up, and make people pissed at government by obstructing - that IS their strategy. For example, Republicans have been blocking votes on nominees to federal posts, taking longer to confirm President Obama’s nominees to executive agencies than nominees submitted by the previous three administrations. Due to these blocks, there is a backlog of 101 executive branch nominees. THE GOP SUCCESS DEPENDS ON THE FAILURE OF AMERICA.

Goldman Sachs committed a billion dollar fraud and who comes to their defense? Republicans!

Republicans take on the SEC in defense of Goldman Sachs! Would you expect anything less?

Rep. Darrell Issa, the top Republican on the House Oversight committee, is demanding a slew of documents from the Securities and Exchange Commission, asserting that the timing of civil charges against Goldman Sachs raises “serious questions about the commission’s independence and impartiality.”

These protectors and apologists of corporate fraud are the same Teabaggers that complained when they were bailed out.


Like many ignorant "Teabaggers" ... Tennesseans need to remember that we receive more in federal funding than we pay in taxes.
Posted by William at 12:14 AM 1 comment: Links to this post

Labels: republicans, Tennessee
Newer Posts Older Posts Home
Subscribe to: Posts (Atom)
What's a "loose canon"?
Differing from a "loose cannon" which means - an irresponsible or reckless person, a "loose canon" refers to a loose set of rules, in this case ... my rules. Unlike many conservative bloggers that stifle debate and delete comments, I don't!