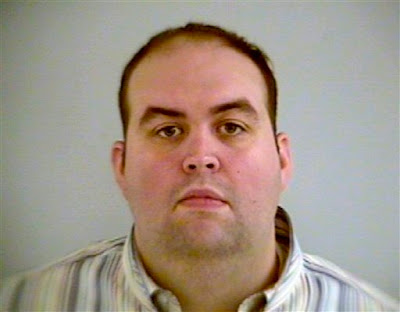 This pig of a man, David Huckabee, son of the religious conservative Republican presidential candidate, Mike Huckabee, was fired from his job as Boy Scout counselor 9 yrs ago for torturing and killing a dog.

(Miller County, Arkansas) Two boy scout counselors, [David Huckabee (18) and Clayton Frady (17)] ... admitted to catching a stray dog during their summer session at Camp Pioneer in Hatfield, AR, and hanging the dog by his neck, slitting his throat and stoning him to death.

How did Governor Huckabee respond? By getting his son off without an investigation.

According to NEWSWEEK, Huckabee fired Arkansas State Police director John Bailey who refused to help coverup this criminal act of cruelty. According to Bailey, Huckabee told him one of the reasons he was being fired was because - "I couldn't get you to help me with my son when I had that problem."

"Without question, [Huckabee] was making a conscious attempt to keep the state police from investigating his son," says I. C. Smith, the former FBI chief in Little Rock, who worked closely with Bailey and called him a "courageous" and "very solid" professional.

David Huckabee was also arrested on a gun charge and got off with a slap on the wrist.

Michael Vick, you should have a cell mate. This is one disgusting redneck asshole who has gone unpunished because of the 'moral compass' of his father. Typical Republican hypocrisy and corruption.

Remember, Huckabee claims his religion “defines” both him and his approach to his official duties. He touts his status as an ordained minister with a theology degree as part of his qualifications for the Presidency.
Posted by William at 2:54 PM

We can plainly see that Mike Huckabee is a bad tree.

I really liked your article. cardiovascular Read a useful article about tramadol tramadol