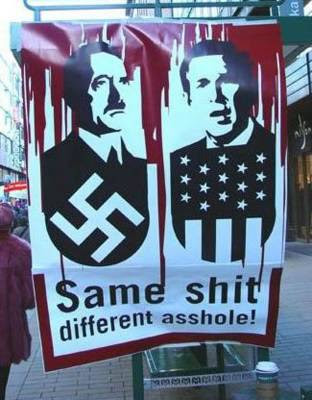 This is in honor of Doc, who is fond of the term "Bu$hitler"

Here's a few links documenting Bush family history of war profiteering and the story of how our president's grandfather helped Hitler's rise to power:

THE STORY of how Bush's grandfather built the family fortune by helping the Nazis.

The video documentary of the story.


Same shit, different asshole
Posted by William at 10:36 AM

I love it. It's so Godwin. You made my day, Willy!

But, but, but--George Bush is the savior of babies. He may not be GOD, but he talks to him regularly.

Did you, perchance, vote for Bush (he is such a paragon of KKKristian virtue)?

Are you deleting all of the reichwinger's comments? I know you don't do that but I just thought maybe some of your good friends from MCB might have dropped in to give us their Zero cents worth.

Aw, I knew that, I was just hoping to draw out some lurkers.